Sometimes I get the urge to code things. I don't know why. Sometimes it's relaxing. The most useful stuff ends up on GitHub, along with some not useful stuff. Some of it even still works. Feel free to have a shifty and see how bad it is. I make code that works, not code that's beautiful.

Some little games I've made at various points. Normaly just to prove I can more than anything. These aren't open source so you just get the download but they are freeware.

My first ever game. It's based on the pen-and-paper game sometimes used to teach vectors. You know the one, you draw a race track on square paper and race around it. You can only change speed in each direction by one square. Well I made that. It has excellent sound effects, even if I do say so myself. It's for Windows only and has an installer and everything!

A game based around the RISK meta game of the Global Conflict online gaming community. It's the RISK system used during the later Battlefield campaigns. It has an instructional vidio and music made by a real musition.

A random assortment of different programs. They do different things for different reasons. Often made to see if I can.

I inteded this to be a plugin for paint.net but it ended up easier to make a stand alone program. Something often used in astronomy to reduce noise, stacking can be used to remove pesky tourists from holiday photos if you know what you are doing. Or just make weird stuff if you don't.

You'll have to believe me on this one. A little program to hide text in images. I don't want you to have it so I can send secrets to... Well... Noone. Because noone else has the program... I didn't think this through...

Okay. How about this. You can have a look at v1. It's based around changing hex values. I have a more advanced version that hides the data better. So you get to put secret messages in images and I get to do it better and others... still can't read them... Damn it...

Okay, technically not a program. Technically not code but markdown. I made it though. And it sorta looks like code. So... Yeah. Not on GitHub but feel free to inspect the source.

A few plugins that I've wanted or needed for OBS Studio. These probably still work.

Adds an overlay into the stream and/or recording that shows who is in your channel and who is speaking.

Lets you use the Logitech LCD to control OBS as well as get some info from OBS, like stream time or FPS.

Plays a nice sound when you start or stop streaming or recording.

A nice plugin to save the replay buffer, switch scene (so the stinger plays), play the replay before switching back to the live action. Posibly depreciated by the scripting version but possibly not.

Bots that I've made to use in Discord. Typically to do stupid things or make up for lack of Discord's functionality.

Discord lacks a channel commander (or any kind of whisper). Many gaming groups (like Global Conflict) use this to talk between smaller groups or squads so I made a bot that can be used to do this. It's basically a voice relay or a second user so it's more of a work around than a real solution. But it works and by reasoning that means it's perfect!

I use this when doing serious stuff. They are also fun to play around with.

This kind of spun out from when I was trying to classify merging and non-merging galaxies using and autoencoder. Specifically using the output from the encoder of an autoencoder and trying to work out where to place a hyper-plane to separate the two. But you can use the decoder to create new images by injecting noise into it and seeing what pops out. This then ended up in me trying to make images using a generative adverserial network (GAN) then using a deep convolutional GAN (DCGAN). I then went back to a GAN when the DCGAN worked. All three of these made some artwork. The images below are animations of images the GAN (170 epochs) and DCGAN (200 epochs) made while being trained. I didn't make any when training the autoencoder, so you'll have to use your imagination for that. The GAN is the noisy one. I would train it for longer but it then starts to collapse into a single mode. Not on GitHub as there are a million of these about already. My bad ones are unneeded. 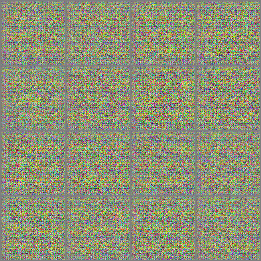 A few plugins that I've wanted or needed for OBS Classic. These should work. If they don't, I ain't gunna fix them.

Adds an overlay into the stream and/or recording that shows who is in your channel and who is speaking.

Lets you use the Logitech LCD to control OBS as well as get some info from OBS, like stream time or FPS.

Switches scene based on the mute status of the mic and desktop. The idea was a way to make AFK scenes or add mute icons.

Is supposed to split up recordings. I made this to see if I could and eventually stopped supporting it. I don't think it works anymore.